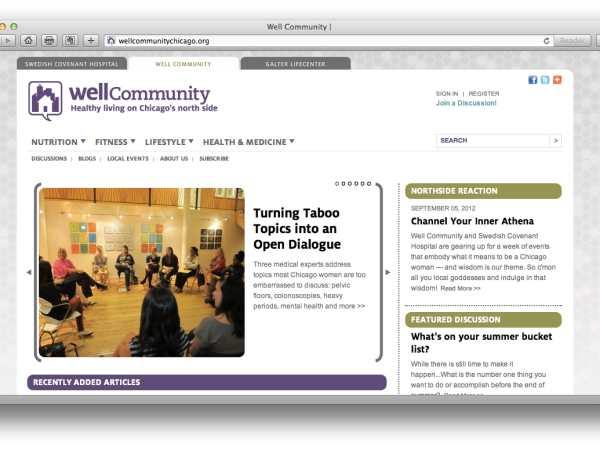 Turning Taboo Topics into an Open Dialogue for Women (Article)

You probably know people who’ve thrown out their back or pulled a hamstring, but did you know it’s possible to throw out your pelvic floor muscle?

That little nugget was one of the many fascinating facts gleamed by attendees at a Girl Talk: Shhhh! Ten Taboo Topics event on Thursday night, where participants had the opportunity to bring up health concerns they may otherwise keep to themselves. The women wrote down anonymous questions that were answered by a panel of medical experts. The event was part of Swedish Covenant Hospital’s Wise Woman Week and took place at Flourish Studios.

The discussions about pelvic health didn’t stop at muscle pulls; the women—most of whom were meeting for the first time—delved into details about incontinence, bowel control, sexual function and beyond. The evening’s panelists, women’s health physicians and specialists, fielded the questions with ease and not so much as a blush.

“It’s just like any other muscle,” said Dr. Shameem Abbasy a urogynecologist at Swedish Covenant Hospital who specializes in pelvic floor disorders. “If you injure it or have problems, like leaking urine, there are pelvic floor physical therapists who can help.”

She explained to the group that three sets of 12 Kegel exercises daily may help to strengthen the pelvic floor muscles. But she warned that it is very important to work the right muscles during the exercises.

“I often see patients who are pushing and straining when doing a Kegel, and that’s not what you want to do,” Dr. Abbasy said.

For more advanced pelvic floor muscle training or help activating the right muscles, she recommended the Total Control class at Galter LifeCenter or making an appointment with a urogynecologist or pelvic floor physical therapist.

From there, the group’s conversation transitioned to digestion concerns and periods.

Dr. Kavita Singh, a gastroenterologist at Swedish Covenant Hospital, fielded questions about Celiac Disease, colonics, colonoscopies, constipation, hemorrhoids, Irritable Bowel Syndrome and functional bowel disorders. She explained that all of these conditions are very common among women and nothing to be embarrassed about.

For people worried about discomfort during a colonoscopy, she emphasized that this life-saving procedure is worth a few hours (or days) of possible cramping afterward. The procedure is an examination of the colon and the opportunity for polyps growing in the colon to be removed.

“One-third of the population makes polyps, but there are no symptoms,” she said. “You can have a large polyp in early or advanced stage cancer and never feel it.”

She recommends a first colonoscopy at age 50 unless there is a immediate family history (parent, grand-parent, or sibling) of colon cancer, in which case you should begin at age 40 or 10 years earlier than when your relative was diagnosed—whichever comes first.

Regarding the increasingly trendy colonic procedure, Dr. Singh recommended staying away from them. “I don’t recommend colonics because the body already has a natural method for cleaning itself in one specific direction.”

When asked about methods to lessen or control heavy bleeding during a period, Dr. Abbasy discussed endometrial ablation, a procedure where the uterus lining is thinned.

Treating the Mind and Changing Behaviors
With many bodily functions and concerns covered, the conversation switched to a topic that women too often ignore: mental health.

She encourages people feeling anxious or experiencing insomnia to start with a few minutes of writing and deep breathing.

“Take a journal, don’t edit yourself, get it all out,” she said. “Most people immediately feel better once they’ve done that.”

If a person wants to explore counseling or therapy, Dr. Julia recommended looking for a therapist who will “listen and recommend changes,” and not one that insists on “telling you what to do.”

Missed the Event? No problem.
Dr. Abbasy and Dr. Singh host talks like this two-to-three times a year to grateful crowds, so watch for updates about future Taboo Topic events.

Participant Danielle Washington of Lakeview appreciated the “free forum to ask anything and not feel judged.”

Her friend Jasmine Sayeh of Lakeview said she was leaving the event with “lots of good information.”

Flourish Studios is a multi-faceted learning gallery in Lincoln Park, which motivates and prepares adults, teenagers, and children to bring about significant, self-selected life changes.

Heidi Lading is a freelance writer in Chicago.